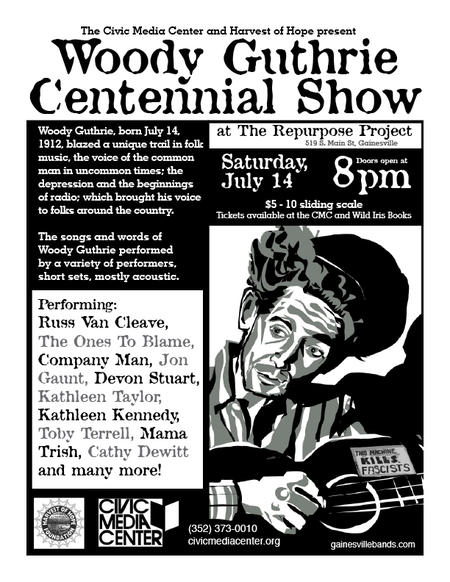 Florida musicians will celebrate the legendary activist and folk-singer, the late Woody Guthrie, the best way they know how, by throwing a tribute show on July 14, starting at 8 p.m. The proceeds of the show will go to benefit The Civic Media Center and The Harvest of Hope Foundation.

Woody Guthrie, born July 14, 1912, blazed a unique trail in folk music, the voice of the common man in uncommon times; the depression and the beginnings of radio; which brought his voice to folks around the country.

Guthrie is best known as an American singer-songwriter and folk musician, whose musical legacy includes hundreds of political, traditional and children’s songs, ballads and improvised works. He frequently performed with the slogan This Machine Kills Fascists displayed on his guitar. His best-known song is “This Land Is Your Land.”

The Harvest of Hope Foundation is a unique non-profit 501(c) 3 organization that has been providing migrant farm workers and their families with emergency relief and financial assistance for over 15 years. As of  March 1, 2012 the Harvest of Hope Foundation has distributed over $925,000 to migrant farm workers, seasonal farm workers and their families for severe or life treating situations. For more information, http://www.harvestofhope.net/